Himalayan blackberry can be removed manually, by hand or by tractor; however, make sure to prevent vegetative reproduction from cuttings if left on site.

Though you might think your holly is contained in your garden, the seeds are carried deep into sensitive forests by birds and other mammals. Remove large trees by cutting at the base, and continue to manage re-sprouting until the root system dies. Seedlings can be hand-pulled.

English ivy smothers forests and creates a mono-culture – when only one species persists – in any region it inhabits. For ground cover, mow the ivy several times yearly to starve the roots or regularly hand-pull. All cuttings have to be thrown away, otherwise they root wherever they’re left.

For ivy growing up trees, cut and remove from the ground up to about waist high; this will leave the higher growing ivy to die.

Broom is a well-known and well-hated invasive on the west coast. As a fire hazard and as another invasive fond of creating its own mono-culture, it’s important to eradicate broom from your property. The best time to do so is when the plant is in bloom or just before, and most importantly, NOT when the seeds are ripe and ready to spread with the slightest disturbance.

Only pull plants that are under a finger or so thick; cut larger plants at the base. Pulling larger plants disturbs the soil and initiates the germination of the surrounding broom. It’s also important to identify native plants that are growing in the same area so as to avoid damaging them when controlling the broom.

Yellow archangel is fantastic at escaping gardens and pots and out-competing other ground-cover plants. The best way to manage this invasive is to never plant it or purchase it from a nursery. In areas it has already settled, it can be eliminated with regular pulling. 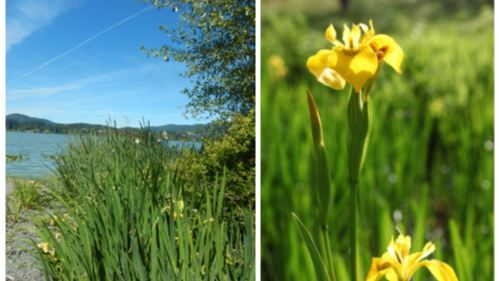 This invasive is rapidly taking over local waterways and proving difficult to remove. Yellow flag iris shouldn’t be pulled, as disturbing and breaking its rhizomes promotes rapid reproduction.

One method that has been proven to eradicate yellow flag iris is to smother the weed’s rhizomes. With plants whose roots are fully submerged, simply cut them to less than 5 cm. For terrestrial or partly-terrestrial populations, secure “benthic matting” (recommended: 18 oz PVC vinyl) over top with weights, to 20 cm past the last cut stem. Make sure there are no cracks, gaps, or air bubbles, and dispose of the cuttings in the garbage for best results. A complete kill will occur within 4 months for saturated sites and within a year for upland sites.

Removing periwinkle by cutting or mowing only helps it spread further. The best way to remove it is to take out the runners with a rake or by hand and pull the roots out to at least 4 or 6 inches. Cover the area with black plastic for 4-6 weeks to kill the remaining roots. Dispose of the cuttings in the garbage.

Prevention: the easiest form of removal

Information Pages – Use the links to learn more about botany and the vegetation and flora of British Columbia.

Photo Gallery – More that 10,000 photos of vascular plants, mosses, liverworts, lichens, fungi and algae can be found in the E-Flora Photo Gallery.

Invasive species are a part of the flora of British Columbia. They are alien species that have become abundant and widespread in the landscape to such a degree that they replace or swamp the natural species assembly in an ecosystem, and cause havoc with ecosystem function.

Report a Weed is a feature of the BC Ministry of Forests and Range Invasive Alien Plant Program aimed at reporting new occurrences of invasive plant species.

Check out the E-Flora BC Invasive Plant Species webpage.